Garimori, S.L is a family-run company located in Guijuelo, dedicated to artisan production

A family-run company located in Guijuelo

Garimori, S.L is a family-run company located in Guijuelo, dedicated to artisan production of the most exquisite meats, hams, shoulder hams and Ibérico sausage meats.

At Garimori we apply the most traditional of formulas and the utmost in advanced techniques, hence producing premium quality Ibérico pig products, which also have a low salt content and unsaturated fats that help lower levels of total cholesterol.

The most exacting selection of Ibérico pigs at their appropriate age and reared with the best possible diet is what turns our products into the most unique and exquisite delicacies to be found in the world, characterized by their flavors and aromas.

Garimori is currently one of the cutting edge companies in that pertaining to compliance with all of the European regulations, developing the entire productive process in modern installations that are certified by the EEC, which guarantees implementation of a food safety quality and management system.

When you consume a Garimori product, you have the certainty of enjoying the excellence of our very best Ibérico products.

2009
In this year Garimori, S.L. obtains approval to export hams to Japan, hence opening the doors to the Asian markets.

2008
This is the year in which Garimori, S.L. obtains the IFS Food Safety Certification, representing the first Guijuelo based company to obtain this international standard certification. Hence a quality management system is implemented, which notably improves the work system that had been followed to date.

As of that moment Garimori, S.L. starts to specialize in the manipulation of fresh and processed meat products.

2006-2008
This was the year in which Garimori, S.L. obtained the Certicar Certification, which comes to ensure compliance of that arranged in Royal Decree 1469/2007, dated November 2, by which the quality standard for Ibérico meat, Ibérico ham, Ibérico shoulder ham and Ibérico loin is duly approved (CERTIFICATE Nº: CP/NCI/004/06).

2003
This was the year when the facilities in which the company currently operates were built, representing a four-story factory with a surface space of 800 meters, with modern installations, duly certified by the EEC. Sandra Moríñigo, Antonio Moríñigo’s daughter, joins the company at this time, currently holding the post of company manager.

At the beginning Sandra Moríñigo followed in her father’s footsteps in that pertaining to production, yet with the passing of time and observing the market trends, she decided to increase the variety of processed products, duly adapting to the demands of the national and European markets.

1999
In this year the constituted company is fully acquired by the Moríñigo Family, continuing with the same activity it had been carrying out to date in facilities that were leased out.

1995
Garimori, S.L. saw the light in this year, having been initially founded by Antonio Moríñigo and María Ángeles Garabaya, with the company name, which gives rise to so many questions, resulting from the union of the two surnames.

At the beginning of its trajectory the company was only dedicated to natural curing of hams and shoulder hams, as all the phases prior to the production process were subcontracted from other sector companies. 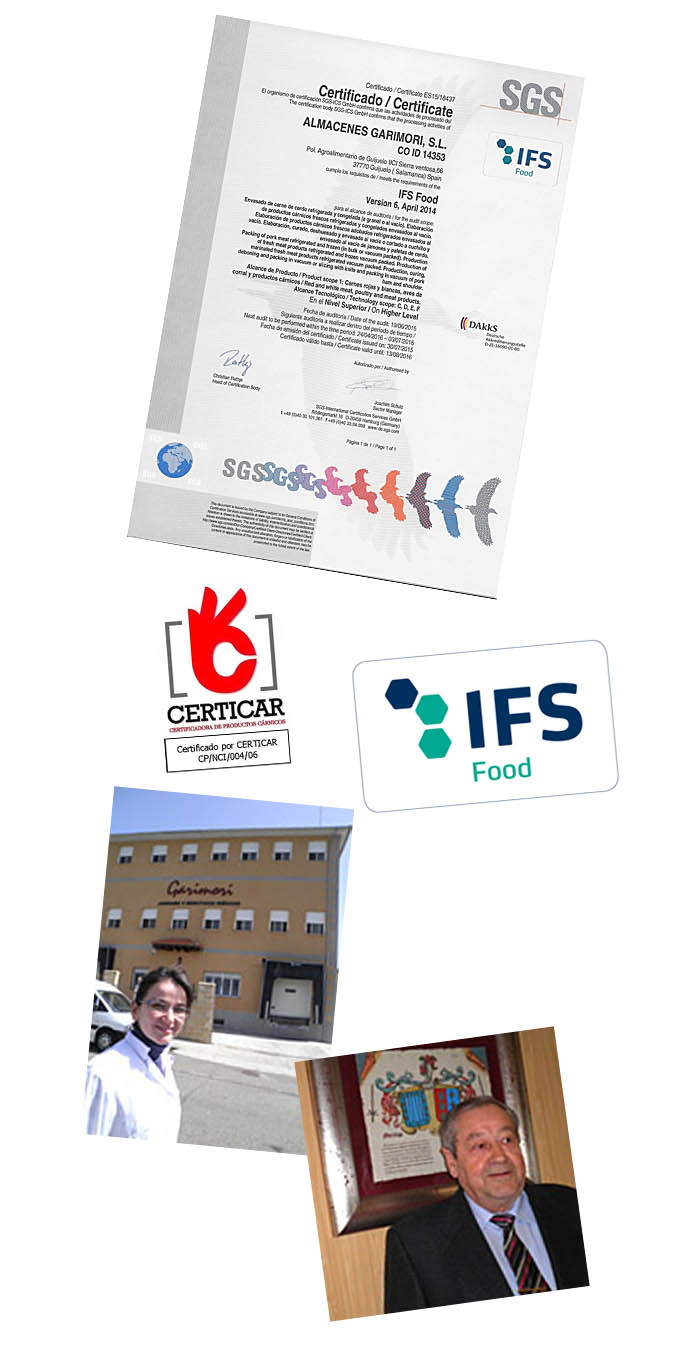 The indisputable quality of Ibérico pork comes to be thanks to its specific characteristics in flavor and texture. This breed of pigs is unique in the world, reason why its production is limited. This is the reason why our select range of products is exclusive and highly prized.

At Garimori, S.L. we carry out precise and strict quality control that ranges from reception of the meat, right through to its processing, preparation, packaging and distribution so that it will reach the consumer with all the food safety guarantees.

The meat of the Ibérico pig is very healthy due to the quality of its fat. The proteins in Ibérico meat stand between 18 and 20 g per 100 g of meat. Its content in cholesterol is very low and highly compensated by the unsaturated fatty acids, which exercise a beneficial effect on cholesterol in blood by increasing the amount of good cholesterol (HDL) and reducing bad cholesterol (LDL). The oleic acid (a mono-unsaturated fatty acid) obtained thanks to its diet of acorns, represents a generous proportion of natural antioxidants. 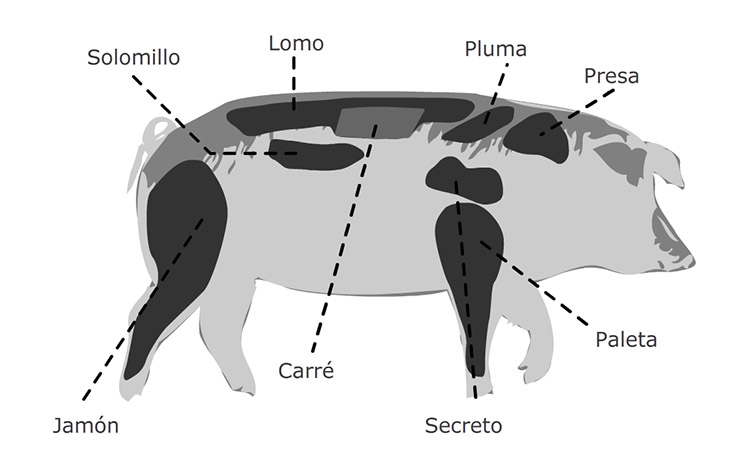 The Ibérico breed is characteristic to six regions of the southern territory of the Iberian Peninsula. It is found in Salamanca, Extremadura, cordillera of the Huelva Sierra, Alentejo in Portugal and a few other pastureland areas of the provinces of Cordova and Cadiz. As a result of tradition and the investigation that has gone into this breed, we can offer a series of cuts in which the virtues of the meat obtained from the Ibérico breed are embodied.